Today, the village is located either side of the Liège-Brussels railway line, equidistant from Liège and Waremme. The villages making up Fexhe-le-Haut-Clocher retain all the characteristics of small Hesbaye villages, interspersed between several farms and surrounded by numerous agricultural spaces which separate it from the other villages in the municipality.

The village of Fexhe is known in history for the peace agreement signed there. This document is the most famous in the history of the Liège principality where it takes on the same role as the Magna Carta in English history.

On 18 June 1316, the "Peace of Fexhe" was signed: it sealed the culmination of various social movements at the beginning of the 14th century. The towns stood up against the Prince-Bishop Adolphe de la Marck. The "Peace of Fexhe" is an agreement which brought these conflicts to an end. It was concluded between the Prince-Bishop, the canons, the representatives of good cities and the Grand Knights. Its aim was to establish a rule of law and a balance of powers.

It all began with the desire of Etienne Bouillon, a Master Distiller, to diversify the local agriculture and showcase it in the creation of an outstanding Belgian Single Malt Whisky produced from barley cultivated in Hesbaye, using sustainable farming methods.
Boasting a wide product range, the Belgian Owl distillery is worth a visit. Find out more about the production process of an authentic Belgian whisky!

The Owl Distillery produces the only 100% Belgian whisky in the world, The Belgian Owl. The Owl Distillery is proud to offer the first genuine Belgian whisky. This single malt has already received awards and is created by Etienne Bouillon in the heart of the Hesbaye. The first and only 100% Belgian whisky A local regional product Guided tours can be booked in advance. After years of research, Belgium now has its own single malt whisky. This "young" whisky, already awarded and recognised, is made from Hesbaye barley and the whole distilling process takes place in the province of Liège. Etienne Bouillon welcomes you to visit his premises and discover the fabrication process of this 100% Belgian whisky! The Belgian Owl, 100% Belgian, 100% Whisky! 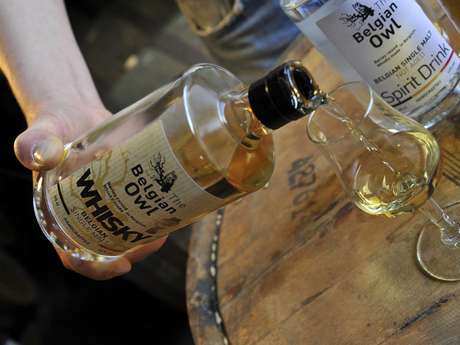 Discover a Belgian, terroir whisky, a great medals-holder which in 2011 and 2015 was selected as best Single Malt Whisky from EuropeExplore a craft production processAdmire authentical and majestic Scottish stillsSupport strong values: sustainable agriculture and fair tradeEncounter a young and dynamic team who takes up a major challenge: to make the best whisky of the world in Belgium! And of course...Enjoy gold and amber colours, smell fruity and floral scents and taste woody and spicy notes...