Skip to main content
Home / Our 27 municipalities / Lincent
-A +A

There is a pretty village by the name of Lincent in the Hesbaye, Leysem in Dutch, located on the road between Tirlemont and Huy.

In Lincent, the soil is silty and crops always thrive.

In addition to farmers, Lincent was once famous for bread oven builders throughout the region, known as "forguinis" (oven makers), a nickname which is now used to characterise the inhabitants of the village. The memory of these craftsmen is embodied now in a statue made out of iron wire, in the middle of the roundabout at the exit of the Brussels-Liège motorway. These bread ovens were built using stone known as tufa, mined from a quarry in the village. Tufa had been used for the construction of various buildings, notably the very beautiful Romano-Gothic church, the ruins of which now serve as the setting for events and shows and have had listed status granted by the Monuments and Sites department since 1940.

Two châteaux were also constructed in the village, the Château Michaux, with its neo-gothic inspiration, topped with two square towers, was built in 1904 according to designs by the architect Froment, funded by the local entrepreneur Théophile Henrioulle, and the Château Ulens, more modern in style and located on the Route de Huy.

Next to the Château Michaux, along the Rue des Écoles, and old farm with a square internal courtyard, once part of the château, has become a dining destination, booking is required. The neo-classic town hall, dating from the 1870s, is an early work by the architect Poelaert, famous creator of the Palais de Justice in Brussels.

Many houses built in tufa during recent centuries can still be seen today and are often attractively restored. The beer known as "Li Pireye di Licint" is the pride and joy of the village. With a pleasant flavour, it takes its name from where the tufa quarry is located. 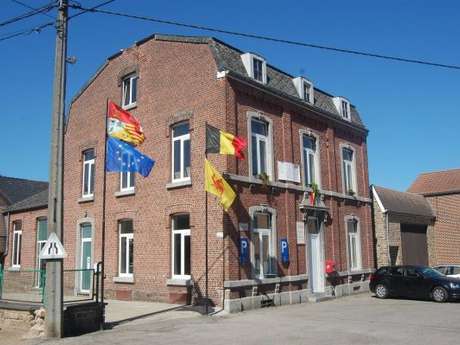 The museum has 3 floors and containing 7 rooms: The history of the village, a medieval manor, looking at the history of 2 world wars, everyday life in the early twentieth century through objects and photos.(The kitchen of Alphonse and Clémentine, cafes, the parish church, Walloon ornaments, a typical village shop) manual agriculture machines, ancient crafts, the old Simone café and the workshop where Tarere was produced.There is a possible free guided tour to the renovated St Christophe Church (Racour’s 14th century church keep of the noblemen, the 16th century church along with its rich heritage. 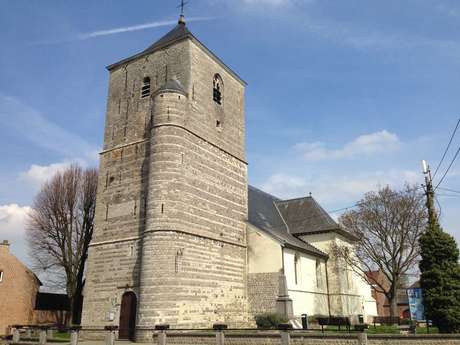 The astonishing church of St Christopher in Racour, a village on the Hesbaye plateau not far from Landen, is noticeable for its imposing square tower (33m) which had evidently been built for defence. It dates from the 14th century and has three levels. It is possible to climb the spiral staircase in the tower, which still has its observation posts and loop–holes.In the porch is a giant statue 14th century of Saint Christopher, 2m 95 tall. It is the oldest wooden statue in Europe of Saint Christopher carrying the infant Jesus. It is polychrome and depicts the saint in olympian and majestic pose, as though lost in thought, carrying a smiling child.Within the church on the right of the rood-screen is a second statue of Saint Christopher. This one is much smaller, dates from the 18th century, and, in contrast with the first one, shows a saint in action as though rowing over the waves with watchful eyes turned towards the child he is carrying. It is interesting to compare the two statues.The well kept interior of the church is essentially Gothic in Gobertange stone and plaster and gives a pleasing impression. There are also 15th century baptismal fonts, stained-glass windows in the chancel(1956) and some small wooden statues of saints.